October 04, 2014
It has been over 18 months since I posted an entry on the DeJoux House blog.  Why? I'm not sure. The renovations were held up for a while as we enjoyed a working, if unfinished house. Looking back there was frankly very little news of note. Lots of socializing. Lots of enjoying the bounty of the land. Lots of swimming in the pond and Ice Skating...but you'd seen all of that in the old posts.

Today, I am inspired to write a post because I have uncovered some news about the history of the house.  Since we bought the house we have always been told that the house was built in 1740.  That's what the town of New Paltz have in their records. That's what the previous owners told us and well, we had little reason to disbelieve it.

However, we have very little proof of when the building of DeJoux House started. This puzzle was further heightened when a gentleman from North Carolina contacted us with the following request.

I am a professor at the University of North Carolina at Wilmingon, and I am currently transforming my dissertation into a book manuscript.  In it I explore the cultural behavior of the New Paltz patentees and their descendants from just before the founding of NP through about 1800.  One chapter concerns architecture, and I recently read the article in the HVVA newsletter about your house (as well as your blog post with corrections).  I had a couple questions that I hope you could answer about dates.  What evidence do you have for the construction date of c. 1740?  I ask because you indicate that it was first owned by Christoffel Deyo, who would only have been around 12 in 1740 (since he was baptized in 1728).  Secondly, where does the 1765 date come from for the addition?  Finally, do you know approximately when the west facade became the front?

I was the educator at Huguenot Street from 2001-2003 at the time that the Society was doing Historic Structures Reports for many of its houses, and I know how challenging it can be to date the houses and their additions/changes, so I'm trying to be as precise as I can.  For my purposes, your house is particularly interesting because the creation of an (approximately) centered entrance on the west side, which replaced the earlier assymetrical and multiple entrances on the east side, as well as for its many original sash windows.

Thanks for your time.


I had not questionned it.  We had only ever stated that Christoffel was the first known resident of the house. Indeed that's how it is stated in the Hudson Valley River Heritage documentation.

Here was my response:


Thanks for your interest in the house.  I must admit I too questioned the age of Christoffel but according to Erma Dewitt he was simply the "first known resident".  I have no idea about the date of construction.  The date for the building and the kitchen came from the previous owner or the new paltz library.  The department of buildings so had 1740 in their file so I never really questioned it.  John stevens, who wrote the book on vernacular architecture, came to see the house and we'd heard that the kitchen was a later addition.  He said that made sense since the wall to the center hall was stone and the door to the kitchen looked like an external door frame.  He also felt the 1765 date was approximately right since the jambless hearth was in the kitchen and that would not have been jambless much after 1765.   Having said all of that I'm very open to any light you might be able to shed.  It's been a total discovery process for me and much contradictory info has been written. I've also heard the date 1756 for the house but again no evidence and no reference to the later kitchen addition.
On page 95-99 of R.leFevre book on the history of new paltz and its families states Christopher deyo lived here and the order of the tax records shown (copied here but not an actual document) would indicate it existed in 1765.  The order of listing in LeFevre matches other tax and map records.The one document I have is the tax record of 1798 the house is listed as being the footprint (51 ft by 26ft) it is today with the 7 windows that are evident (5 still original) and the transom windows above the doors (2 x) but doesn't state where these were.By 1798 the property had clearly passed to his son David Deyo who is listed in this tax record and that is also the name on the 1790 map I have.I have no idea about the door moving.  The road was on the east side in the map from 1790 and the 1798 tax records describe the house as " west of the rode (sic) from Shawungunck to Springtown" year describes the house as between the road and the mountain.The Simeon de Witt map of 1802 is very large scale but the path of the road  looks similar to the 1790 path running closer to the river.   By 1870 we have photos of the house with the door on the other side.  I know that's a big window of time.  My guess is that if you can find when they moved the road then that's likely when the door moved too.I'd love to hear any other findings you might have about our home.  It's an amazing house in amazing condition and I love that the structure and footprint has not been changed too much.
If ever you are in new paltz you must come by.  I'm eager to know more.
William

Then, to my surprise on this rainy saturday afternoon I stumbled across a very interesting book called
Native New Yorkers:  The Legacy of the Algonquin people of New York 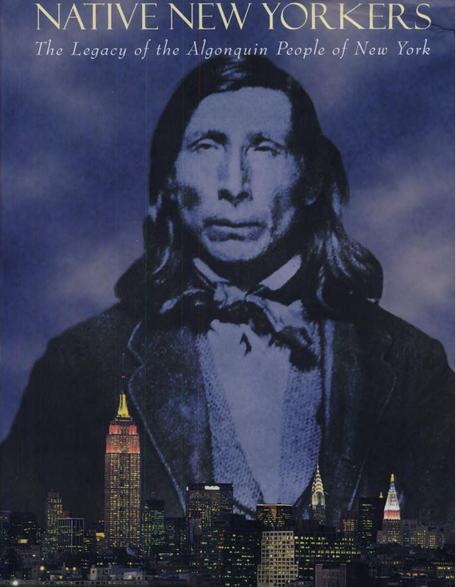 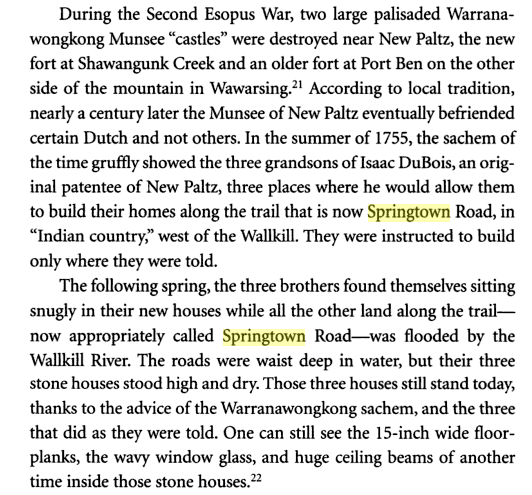 There in the book was the story of how the Munsee people helped site our house above the flood waters of the Wallkill River.  A fact we discovered when the Hurricanes of Irene and Lee hit a couple of years ago.  The timing of our house being built around 1755 makes much more sense just one year before Christoffel got married and as the hostility with the Native Americans cooled.  The west side of the Wallkill River was a 'no-go' area in that time and was what protected the Huguenots of New Paltz from attacks from the west.  So, until more information is uncovered I'm going with this story.  1755 and 1765 for the kitchen.