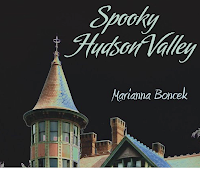 We arrived at the house this weekend to meet with the contractors who had poured concrete in the basement on Friday. When we arrived we found a family standing in front of the house taking pictures. Being the friendly types we are, we went over to chat.

They told us they were on a haunted house tour and were looking at the house because their daughter had been talking about the ghost at our house for the last couple of days. She had bought a book called "Spooky Hudson Valley" and in it was the story of Maria Deyo and a tragic tale of a mother killing all three children and then killing herself.

The family were wonderful and excited to be shown the house. They showed us the book and at the beginning of the story was a picture of our house. The book went on to say that Maria sent the men to the fields and then she slit her daughter's throat and the throat of her other two children...then killed herself. All this happened on September 13th 1801. There was reference to an Ulster County Gazette story about the killings and the book also reprinted an elegy (not to be confused with an eulogy ) called "Elegy on the death of Maria Deyo". I have ordered the book, so more to come on this subject.

The challenge this poses is that our understanding of the history of the house is that it was built by Christoffel Deyo, who records show married Deborah Van Vliet. Christoffel died in May 1792 and Deborah died in May 1801. The maps of 1790 show that the house was owned by D. Deyo . Christoffel's first son is called David Deyo is reported to have married Rachel Ean in 1798.

David Deyo dies in 1804 and the house goes to Rachel Deyo (Ean) who remarries Abraham Relyea. We have documentation for latter part of this chain in the deads of the house. These deeds (below) are Dated 1826 and document the of all lands known as "Kline Bonticoe" were sold to Abraham Relyea. This includes 94 Acres that were left by David Deyo to Rachel Relyea (wife of Abraham and previously wife of David Deyo and we assume this to be the Rachel Ean mentioned before). It also documents Christopher Deyo (David's son) and Abraham E. Deyo (and his wife Elizabeth? not sure who they are) selling the remainder of the farm for $2520. Totaling 221 acres.

So, in terms of ownership of the house there is not much room for Maria Deyo in between David Deyo as shown in 1790 map and the murder mystery of 1801...watch this space. If anyone can help clear this up, please write a comment.