November 03, 2012
It had been such a wonderful weekend and the Smoketree looked spectacular.  It may look like this photo has a filter but this truly was the amazing color of the tree this weekend.   Last week I'd spoken to a journalist recently about the tree because he'd heard about it's size and splendor.

He asked for a photo of me with the tree.  We took a couple but they were never used.   It was a bit of an odd article in the end.

You can read it here: Tree article.

It was our favorite weather blogger Hudson Valley Weather who first told us of "Sandy".   Alex who writes the blog posted the following over a week before Sandy landed in New York.

"The most popular name the next week will be “Sandy” and what is to ultimately become of the storm that as of this morning is nothing more then a cluster of thunderstorms in the Caribbean. There has been very little changes overnight in models thoughts on another landfalling tropical system for the Northeast, below are images valid for 10-30 and 10-31 of the Euro model showing a 950 mb storm making a southern NJ landfall and then slowly moving into central PA. We are still a week out from this storm but the model consensus is down right concerning. [snip] As with any major storm threat to the HV we will be updating on this situation frequently over the next week and as things change, we will share the information".

Hudson Valley Weather is easily the best weather service for this region...why? Well for all the reasons outlined in this Forbes article.

Daniel and I had been up at the house the weekend and when we heard about the storm we decided to stay and ride it out up at DeJoux.  When my office decided they would close on Monday, that was it.  We assumed that the Wallkill would flood as it always does and that we were in for a rough ride.   We had our generator and we bought a new sump pump for the basement that could pump out any water that came up through the floor.

Chuck Russo came to install our new Nest thermostats.  They look cool but what a pain to install with our geothermal system.  After 11 hours of professional installation we still couldn't get them to work with the Water Furnace Intelli-zone which controls our heat zones.  At the end of the day we decided to bypass the zones and just have two thermostats controlling the two heat pumps (one upstairs and one downstairs). 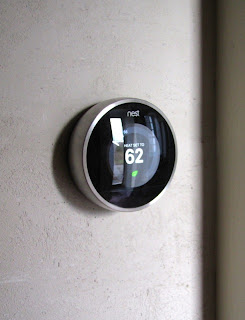 The same day, Josh came and installed the cabinet doors on the master vanity and the new casement window in the Master Bedroom. 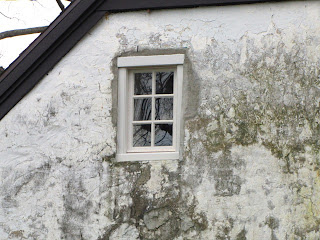 The window looks great.  Finally the north of the house doesn't look like squatters live in the house.  DeJoux has all of it's 'eyes' restored. 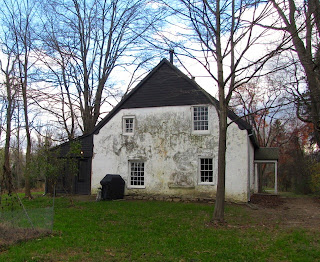 Sandy hit hard but not as much rain as the media expected.  Alex had told us that the storm would pass to our west so it would be drier than other areas that were hit -  once again he was right.   The wind was intense and took down a tree opposite "Duck man" and we saw a flash and all the lights went out.   We were without power for about 18 hours.   Within minutes the generator kicked in and we had all our lights, heat, water, pumps etc.  The whole house operates on the generator with only the garage and the back up heat supply not being powered on the generator.   (Very glad we went for the big one...a few thousand dollars more but worth it!).

After a night of crazy winds we woke to very little damage and surprisingly no floods.  The photo I took of the before...turned out to be exactly the same as the after.  I'm not complaining...

It was Tuesday and a day off for Nate, Bonnie and Derek at A Tavola.  Nate had not visited the house and he wanted to come by.  The three of them came over and after a couple of drinks into the afternoon Bonnie and Nate asked if they could stay and cook dinner for us all.   Well, who am I to say no.  Two of the best chefs in the region and the owners of the best new restaurant in the Hudson Valley (according to Hudson Valley Magazine) want to cook us dinner.   There is only one answer..."OF COURSE".   They went back to the restaurant, grabbed some supplies and came back with Prosecco, wine, chickens and all manner of sides and veggies.

I won't post all the pictures here...They are are in an album on Facebook for those who are my friends.  HERE

It was the most amazing evening of amazing food. We met new friends from down the road and after dinner activities included tree climbing.  A great sport for anyone under 30...Someone should tell Nate that.  At one point, when Bonnie was still up the tree and could not do anything to help, Nate fell out of the tree while trying to execute an "in tree maneuver" ...landed flat on his back...thankfully not hurt.

The City was really badly hit.  Manhattan was a disaster zone.  The power station went out and the whole of downtown was without power for a week.   Daniel's office building had 11ft of water in the basement...sea water...from the surge...all the way at 11th and 9th avenue.   Our apartment in the city remained without electricity and water for the whole week...so we stayed up at the house..."remotely working".