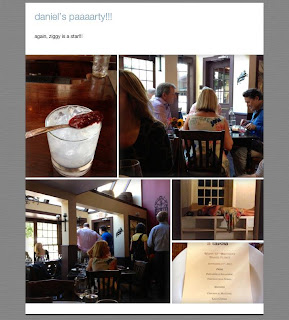 Well, what can I say that hasn't already been said on Facebook.    To everyone who came to Daniel's 50th Birthday party a big THANK YOU.

It was a total triumph.  Everything I could have hoped for and more.

Rather than repeat all the photos, here is a link to the growing gallery on Facebook.   This seems the easiest place to collect together all the pictures from multiple sources.  Enjoy.

Daniel's whole family came from California and Virginia to be here with him.  They stayed at the house so we tested out the plumbing and AC with a full house...everything seemed to work as planned.   The family were here for a couple of days prior to the party and we spent that time simply sitting around eating and drinking (more of the latter with this family!).

We rented several picnic benches for the Peninsula and some small tables and chairs for the garden.  These tables and chairs became a wonderful dining table for everyone at the house.   Jane Edwards-Hall was also up from Miami;  my Brother John and Siggy were here from England and Laura Anne Edwards was here from California too.    We had lunches in the garden and dinners in the dining room every night.  At times were up to 15 people.   It was great.  I love cooking for large groups and this was the best...family and friends warming our house as only family can.

The party day went with a bit of a blur.  I remember the anticipation and anxiety as we left for A Tavola worrying if everyone would turn up...Then the day just went from strength to strength.

We started at A Tavola with some nibbles and Gin and Jam (Prosecco of the weak hearted who didn't want Gin at 12.30 in the morning!).   A Tavola did us proud.  Amazing appetizers with aranchini (rice balls with parmesan) and crostini with roasted rosemary and honey.    Derek made more "Gin and Jam"'s in the first 40 minutes than I think he's ever made.  We got through many many bottles of Gin.  But, Derek's Gin and Jams are addictive.  They made history.

I spent the first hour at the door welcoming people with a Gin and Jam in one hand and an Aranchini in the other.


When we were all suitably liquored-up we found our own seats.  We had taken over the whole restaurant, upstairs and downstairs, so it was uncertain if the right combinations would happen.   As it was, everyone seemed to find their perfect place.   New friends... old friends the combinations on each table seemed to work.

A Tavola has amazing hand made pasta and Nate had been hand making Farfalle for weeks to be able to serve 65 - 70 people hand made Farfalle.


My God, it was worth it.  We had Farfalle with local tomatoes and Pappardelle with 7 hour cooked bolognese...and that was just the start.   We went on to have the Chicken under a brick with kale Caesar salad and warm, lovely, lovely, silky polenta.

Then it was back to DeJoux house for the afternoon and the after party.   Many people came straight back to the house and enjoyed the sunset.


As people arrived the congregated in the kitchen.  The long kitchen table had been converted into a bar and filled with local spirits.   We were especially lucky to get some of the first batch of a local burbon called "Black dirt"  made by Black Dirt Distillers.  We also had local Gin called "Half Moon" made just up the road in Gardiner at Tuthilltown Distillery and "Bootleggers" Vodka from Prohibition Distillers.  What with the wine trail just down the road we certainly picked a good spot to buy a house.
When everyone had arrived we served desert which was also provided by A Tavola -  Olive oil cake and grapefruit sorbetto with rosemary.   Daniel and I were responsible for serving this.  The porch became the place to be.


By this time, our friend Coleman - the DJ -  had set up his kit.  Outside the porch and playing the music out to the field.


When Coleman plays there is only one course of action...


It went a little "that" way.   The police were called at about 9.30 but we were not shut down.  They spent so long outside our house with their lights going that their battery went flat.   The neighbor who called the police joined the party for a bit and then told us to turn the music back up...(we had already had done that!).   Coleman was amazing and got everyone dancing even though they were dancing in dirt on a slope...what we suffer for our art!

How it all ended I have no idea.   I went down to the fire pit on the peninsula to roast marshmallows.   Sat down on the cool grass and lay backwards, looking at the stars.  Next think I knew Cindy was waking me up and telling me it was time for bed...that's what real friends are for.   I won't share the photos of me asleep by the fire pit as they are already in the public domain.  Several people immediately broadcast my demise on Facebook and Twitter on the night.   That's facebook friends (and family) are for!