Two months have gone by so quickly since the last update.  Not surprisingly a lot has happened in that time.   Wow, we now have a flushing toilet and running water.  We have the geothermal heat systems up and running and all of the duct work is complete.   The beams and ceilings are complete and all of the upstairs plastering is finished.  The doors have been re-hung upstairs and although the floors are still covered until the plasterwork is complete downstairs, the house is almost functional.


Daniel and I have been staying in the two guest rooms while work continues on the ceiling in the master bedroom.

Now there's a story.  Originally we were going to buy some wood for the ceiling but Neil our contracting/neighbor said he would be able to get an old oak tree from his property milled for about the same price - $1 per square foot.   This sounded great.  We loved the idea of using wood from the fields around the house.   Although the wood would be green, we wanted a barn feel to the room with the old, hand-hewn collar ties of the house.   The green wood will shrink, crack and split a bit as it dries but we want that texture and character. We put black tar paper behind the boards so that it will look like a dark void behind.

While we are talking about wood, Daniel and I have also spent more time cleaning up the ceilings in the library and the living room.  You remember we spent hours stripping the beams and taking off the old lime-wash and the paint.  Hours of hard work and very sore shoulders.  Well, it did not stop there.  We've been testing different finishes with different oils.  We don't want anything that looks like varnish or finish but we do want to add some life to the dry, old beams.  After some experimentation we went with 50% Tung oil and 50% mineral spirit.  A light cover that just brings out the grain and adds a richness to the color.   After we let it dry we lightly sanded it to take the sheen off.  It gives quite an amazing finish.

The plasterers have also been hard at work.  They had to stop for a while because they were working at the Boston Museum of Modern Art.  (Not to mention that they also did some historic plasterwork for the Metropolitan Museum -  they really are the best in the business at this historic plastering).   We've tried to replicate the plaster finish that we discovered in the house.  Not too smooth, some ridges and texture but nothing too fake...it has to look like someone did it by hand.


Outside the house we have also re-framed the old porch.  Going from 4 'bays' to 3 and putting in two new door frames.   The clapboard on the side of the porch will be painted a dark color and the 'bays' will be screened in with a single screen in each to create our screened porch.   Daniel has been testing the colors we want to use.  We are trying to create the look of those old black fishing shacks on the East coast of England.  They were painted with black tar to protect them from the weather which gave them a mat brown/black/purple color.   The color we found is called 'Deep Caviar'.  Sort of a modern take on this theme but we love it.
Neil also put some of the copper flashing on the dormers which is going to look very neat.  Don't you think?
In other news... A little bit of scandal and gossip.

While we were picking up branches in the old orchard, Bob Benjamin (of Bob and Carol across the road) came over to chat and find out how we were progressing...yes, everyone wants to know when we will be finished...me included!  He told us that where the old apple trees were there used to be a barn that was removed.   We told him we had met with the Jorgensen's grandson who had visited a few months ago.  He remembered the family and their children, but not specifically the grandchildren.   He told us the Jorgensens had two children but the daughter was something of a rebel.   As missionaries the Jorgensens did not have wine in the house but their daughter stayed in the room on the side of the garage and had her own stash of wine in there...by all accounts quite a collection of wine.   Now, Mr Benjamin we very gracious but said she was very much "a missionary's daughter".   She liked to spend a lot of time at the airport where the Jorgensens flew their plane and was apparently "very well known in the village"...I think we know what he means!

(I know Reid Jorgensen reads this blog from time to time.  With all respect, we love the sound of your Aunt.  Wine and Pilots...sounds like our kind of gal!).

We finally got to meet Carolee Schneeman -  the person who lives down the road in what used to be Maria Deyo's house -  at least by my calculations.   She came over to say hello and told us stories of our house and how she came to save her house 45 years ago.  It was a rental and was going into foreclosure and she did all she could to stop it being knocked down -  even though she had no money and didn't want a house.    The best part was that she told us that both our houses were the first houses to be built out of the compound of New Paltz, near to the fields.   Apparently the Iroquois or Lenapes identified the locations of the houses for the settlers -  which explains why the flood water came near, but not quite to the house.  The house is ideally positioned for natural heat and ventilation.   The sun rises in the morning on the porch, sets through the front door in the evening.  The prevailing winds blow through the house when the windows and doors are open.  Restoring the old door in the Center Hall allows that breeze to flow freely once again.

We carefully told Carolee about the Deyo murders.  She was fascinated.  She said that she knew the house was haunted and the ghost had been very welcoming to her.  In fact, when she first lived in the house she was haunted by vivid dreams telling her how to restore the house.  First she had a dream to take up the flooring that had been laid in the house to reveal the beautiful old floorboards, similar to ours.  Then she had a dream to go to the outside of the house and uncover a golden stone.  She followed the dream instructions and revealed the old stone walls that had been covered up.  The golden stone was the local quartz stone that has a yellow/golden color.  Then she had a dream where she was told to punch a hole in the ceiling to uncover the old, hand hewn beams.  Like our house a modern ceiling had been added to the house and Carolee's dream showed her where to find the beams.

Carolee also confirmed that we are not the first gay couple in the house.  Jane Little, who was the Dean of the school in New Paltz, lived here in the 60's with her partner Margaret Church.

Finally, this weekend the two Canada geese that had been nesting on the island in the lake had their babies out on the water.  Parents were proud and the babies very cute. 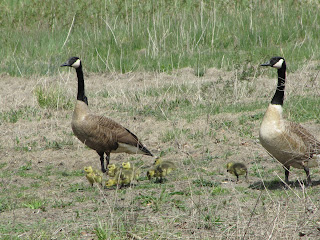 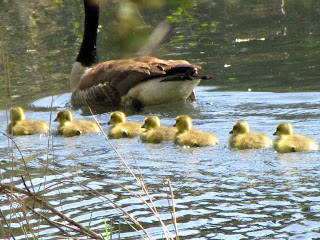