September 12, 2011
It's not uncommon for me to hold two entirely contradictory points of view at exactly the same time.  Part of the reason I have done two posts today is to share both the frustrations and the joys of the last two weeks.   In case you don't know, in the last two weeks we have had two of the top ten floods of all time on Springtown Road.   This hasn't particularly made the news in America but it certainly won't have made the news in the other parts of the world where I know there are people who read this blog.

The first was post Hurricane Irene.  The ground was already pretty wet with the wettest August ever.  Everyone expected Irene to hit Manhattan hard but in the end it wasn't too bad.  What we hadn't planned for was the bands of heavy, heavy rain that hit upstate New York.   More than 10 inches of rain fell in 24 hours.  Then, to add insult to injury, another hurricane passed New York a week later (Hurricane Lee).  For some reason it hung over our part of Ulster County for a very long time dropping another 8 inches of rain and causing the Wallkill river to flood once more.


We were in the city for Hurricane Irene and thanks to our wonderful neighbors Susannah and Niel, we had a running commentary of how the house was doing.  They even sent us photos to show that the waters did not reach the house but the basement had 5 ft of water.


The second of these floods was the surprise.  We were not expecting it and neither were the neighbors.  Daniel was heading up to the house to meet the FEMA insurance rep to review the damage in the basement from Irene (more on this later in this post).  He left home to meet her at the house at 10 am.  As you can see from the chart above, that morning the river rose sharply and between Daniel arriving at the house and noon, the river had risen 4-5 feet, cutting off Springtown Road on both sides.  The car and Daniel were stuck at the house with no way of escaping.  (If you are wondering the FEMA rep did not make it either.  She could not get through the floods and was deployed elsewhere instead).   It was clear Daniel wasn't making it out that night so I got on the bus and headed out to meet him on Thursday night.   The bus was still running and I managed to get the 5.30pm bus.   Daniel said he would walk into New Paltz along the thruway and we planned to meet for Dinner in our local A Tavola.  I was on the bus, Daniel started walking and the roads were clear, it was a beautiful day (as you can see in the pictures below).  Half way to New Paltz the bus's tire blew out and we sat at the side of the thruway for an hour.   Daniel reported that the rail trail behind Bradley farm was flooded too.  He waded through this:

One of the neighbors was driving along the rail trail and gave Daniel a lift.  He described how when  he entered the cab of the truck there was a cloud of mosquitoes...he thought it odd but hadn't thought that they might have been on him.  That was a pleasure we got to experience again later.

My bus finally made it and we had a wonderful dinner.  My first request was a large martini to take the edge off my frustrating bus journey  -  Daniel and the fantastic food of A Tavola made up for the rest.  After dinner we walked up to our trusty Super8 motel so  at least we had hot water and electricity that first night.

The next morning (Friday) we walked an hour and a half to the house, stopping on Starbucks as we went.  The rail trails started off OK...it was fun, right? Beautiful day ....a walk along the rail trail? 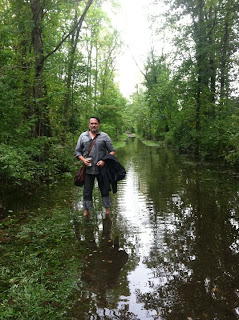 Our smiles were quickly turned to frowns as the mosquitoes came out.  There were thousands of them.  Hungry and swarming.  We had to walk with our coats over our heads and backs just to stop them biting through our clothes.  The water got deeper and the combination was miserable.


When we finally arrived we were bitten to hell, wet and hardly speaking to each other...Although quickly reunited by our mutual anger towards Brian the contractor for leaving the house totally unprotected through both storms (see previous blog post for that rant!)

We would probably be perfectly within our rights to be mad as hell and really miserable at this point but the truth is the rest of the weekend was sort of wonderful.  A couple of different things contributed to this.  First, we found ourselves in the middle of rather a wonderful community.   As soon as it was obvious we were staying at the house, all the neighbors came over to say "Hi", give us advice, offer us supplies or cups of sugar.  Neil came over and offered us beer and showers in the morning while Susannah offered us wine when this is all over.  We met Maria and her dog, Bob (of Bob and Carol fame) came over to check on us, as did Lee (the Gardening guy) and Richard (the duck man).  Even Tom (of Tom and Colette) came over to check on us.   Sure, we had 5 ft of water in the basement (and there was solidarity in that because everyone on Springtown had water in their basement) but we were all there, all in the trenches together and ready to help each other out.  That's what Springtown is all about!

Secondly, it was the most gorgeous day.  We went for a canoe over the fields and the peace and calm was spectacular.   No car noises, no machinery.   There was great voyeuristic pleasure to be obtained from canoeing across our neighbors property.  We wouldn't walk across our neighbors fields on a normal day but now we could go wherever we wanted.  We weren't on their property, we were literally floating above it.

The further up stream we got, the worse the flooding became.  Our little enclave sats above the flood on a little knoll.  From the fields you see the rise and although the waters were close they were still a short way away.  Many of the other residents of Springtown were not so lucky.


So what to do?  We couldn't take the car out (and there was no way we were walking back along the rail trail with all those Mosquitoes).  We had all our camping gear, a stove, lights, airbeds, bedding and everything.  So, we simply cleared out one of the bedrooms and set up camp for Friday and Saturday Night.   We rode our bikes through several feet of flood waters to the local shop in Tilson.  Bought provisions of water, burgers, chips (crisps) and eggs, bacon and sausages for breakfast (we had tomatoes still on on the tomato plants in the garden).  We had a couple of bottles of wine in the garage which were ready for drinking (one was a wonderful bottle of Nicholini wine from John and Cheryl - I'm sure they'll approve of this emergency usage).  We watched the full moon rise and we listened to the crickets and Adele on the iphone.  It was a magical evening.

On Sunday, the waters began to recede and the basement emptied very quickly.  As soon as the water went down a foot or two the water in the basement drained away.  Those new drains were doing their job.   We photographed the damage and recorded the serial numbers of all of the equipment for the insurance claim.   More conversations with the neighbors about when the electricity might come back on...noon? 8pm?  my guess was that it would be well after we had escaped back to the city.  By about noon we heard some trucks and cars on Springtown Road and we realized we might be able to escape.   We needed coffee so we drove through the last remaining flood waters to get coffee at Market Market.  It tasted soooo good.  We were free to leave.

One last trip in the canoe and some tidying up and our flood disaster was over.   It will prove expensive, it was very inconvenient but it was, in the end, a lovely and enjoyable weekend.  Delightful in it's weirdness, unexpectedness and absence of creature comforts but I really enjoyed not being able to use the car, not being able to go anywhere and just making do with what we had...and what we had was magical.