Progress - it's slow but we are moving forward

June 26, 2011
Well, a lot has happened and in the same breath a lot hasn't happened that we thought we would have had done by now.   Progress is very slow indeed and a little frustrating.  Since the last post we have been updating the facebook page with pictures as they happen but my guess is that you are all waiting with baited breath for the back story of some of those.

I'll give you the full back story on the renovations.  The big hole that you saw in the floor some time ago is now filled with beautiful Douglas fir.   We were able to find some old beams in a warehouse in Brooklyn that were between 9 and 14 inches wide.  The outside edges of these beams had a nice patina to them and because of their age the grain of the wood was thin and matched very closely what we had in the master bedroom.  These boards were 20ft long, 1.5inches thick and very heavy...i know because I lifted them in through the Mow door with the help of Brian our contractor.

I've just searched all of the photos we have and can't find any of these boards in place.  They look great. We are still owed three boards so there is still a big hole in the floor.  Brian insists they will be here soon...your guess is as good as mine.

The other big development has been the framing upstairs that has really started to give a sense of what the rooms will look and feel like.  We made a bit of a change to the plans.  After living with the beams in the attic for so long we have come to love the their hand hewn character.  Obviously we still have to insulate and we still need some space up in the attic for the mechanical systems (this is going to live over the upstairs hall).  Our revised plan is to open up the master bedroom ceiling all the way to the peak.  Keeping the cross ties visible and insulating directly onto the roof structure (the historians among you will be pleased to note that we have wrapped all the beams in Tyvec so that when the spray insulation goes in it will not damage the historic beams and can always be removed without harm).


The challenge here will be to stop this looking like one of those Marriott Hotels that have exposed beams in a sheetrock box...That just looks tacky.   Daniel came up with a really great plan.  The interiors will be finished with a "butt ended" plank that will be fixed to the walls instead of sheetrock, that comes down to the 'knee wall'.  The wood will be finished with a dark pitch and will have quite a bit of texture to keep that wood-on-wood sensibility.  Hopefully looking like the inside of an old barn.  We were thinking it might be fun to finish these with a thin black tar or pitch that reminds us of those black barns/fish shacks in Norfolk. 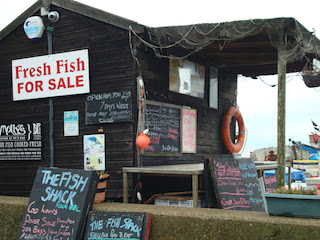 Other developments come in the form of the hearths and the "board wall" that we are recreating around the stairs.   Some of you may not have known this but modern wood is too evenly finished to look good in an old house.  Apparently, in the good old days, wood was finished by hand, with a hand plane.   As a result all of the wood around the stair well has to be finished by hand to achieve the same effect.   We've also added a very small (1/4 inch) hand carved bead on each board to give it that authentic, hand made look.   This is going to look fantastic when it is all painted.   Especially with the large hearth on the other side.  (BTW, they put the concrete down on Friday so that hearth should be finished next week).


The hearths are coming along.  Still not in but we have laid them out how we want them.  The tiles look amazing.  There was a bit of a battle with the contractor to lay the living room hearth with a bit of a slope.  The floors are not even so there is a two inch difference between the floor on the left of the hearth and the floor on the right.  To mitigate against this we have put a slight slope on the outer hearth (obviously not the back of the hearth otherwise the logs would roll out into the room!).  We had to go to the building inspector and get special permission to put this gradient in.  The hearth guy didn't want to do it and Daniel had to get really tough with him.  At one point he told his guys to put their tools down and they were going to walk off the job.   Not sure how Daniel did it but eventually he got what he wanted and both the building inspector and the contractor agreed and the final hearth looks fantastic. (There is still the mantle and the wood panelling to go on the front of this so the bricks will be mostly hidden.  Not quite as busy as it looks here!)