June 26, 2011
Writing two entries today.  This is the second of the two.  The previous entry called "Progress..." covers the renovation news.  This one is what might be called the  "lifestyle segment".

The vegetable garden has been planted and we now have potatoes, beets, kale, beans, tomatoes, strawberries as well as basil, rosemary, thyme and parsley.   I discovered an asparagus in the weeds and moved it into the garden and have had some edible asparagus this year.


We've sold the house in Stone Ridge and do not have a place to stay.  I thought it might be interesting to see what it was like to stay in a tent for a couple of days ( I keep telling myself this is a choice... There's a hotel up the road!).  I bought a tent on the way up two weeks ago and pitched it on my own. It's called "Copper Canyon Cabin Tent" and it's huge.  Two rooms, full standing height .   We put down rugs and furniture in the hope that it might feel a bit more substantial....but it still feels like a Tent.

The first night we stayed in it we had the cats with us.  At first they were not too certain.   This was not helped by the most massive lightning and thunder storm that tested the waterproofing (very successful) and the cat's nerves (less so).

After the first Day, Booh and Cole started to relax into it and ultimately i think they sort of enjoyed it.

Night time is amazing at the house. We came back from dinner last weekend and there were millions of fire flies all over the place.  The sky was clear and there was a huge red moon and stars.  It was so beautiful but a little noisy.  Bull frogs and tree frogs were making such a racket you could hardly get to sleep.  Cole (the tabby one) got so freaked out by the dawn chorus of birds that he tried to escape the tent.  Daniel, half asleep just saw him exiting the tent and managed to grab his tail before he got out into the wilderness.. The front door zipper now has a lock on it in the evening or when we leave the pussies on their own.

The mosquitos are more prolific this year and they get into the tent.  We've tried all sorts of i phone apps that seem to do the job but you can't leave the iphone running all night because you run out of battery.  We are looking at other options, any suggestions welcome.

To our surprise Bernie the brush hog man turned up while we were away and mowed the field. Wish he'd told us because we were loving the wonderful wild flowers that were coming up.  I guess they will grow up again but it seems like mowing happens when Bernie is ready, not when we are ready.

I'm working on building a lawn down by the river.  I don't know if you remember I sowed some grass seeds down there and the week after the river flooded and washed them away.  Well they obviously didn't wash them all away because the grass is beginning to take in small patches.  I've started mowing regularly to keep back the weeds and the poison ivy.   Really looking forward to seeing if we can keep this area clear and grassy after every flood.

Swimming is late this year.  It's been cold and rainy so not much opportunity to swim.  We started swimming in the pond about three weeks ago.  Daniel captured the only picture of swimming so far this year. 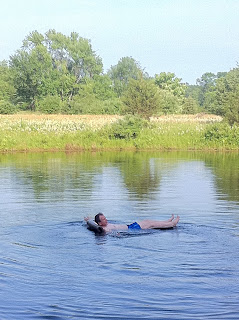