April 25, 2011
All of the chimneys at DeJoux House were damaged and unusable.  Daniel met one of the previous owners, Russell Gilmore, at a Huguenot Historic Society event and he was pleased that we were finally making it possible to have an open fireplace in the house.  While they would have had open fires originally, all the chimneys were so damaged that they could only support stoves.

We've researched the various designs of chimneys at Huguenot street and opted for a design that was the same as the one on the Abraham Hasbrouck House, probably the closest match in age and style to DeJoux House.

This weekend we were away but our friend James Rowley and family were visiting New Paltz and popped in to see the house (and have a quick canoe around the pond).   It was great to see the new chimney taking shape. 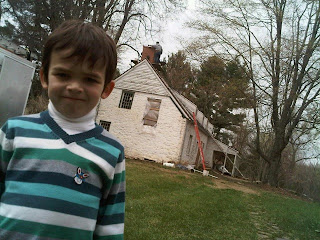 The salvaged bricks from the old chimneys have been used for the new fireplace in the dining room so we have not lost the authentic, hand made brick shape.  There may be the lingering smell of old creosote from the bricks but this will just make the fireplace smell authentic. 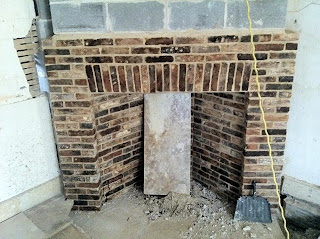 The other excitement of the weekend was the knocking through of the original door in the Dining room. As you may, or may not remember, the original door, as identified by John Stevens, had been blocked up and made into a window.   As the contractor knocked out the window you could still see where the original plaster formed the doorway and where the wooden floorboards jogged in to meet the outer wall.
This will restore the original center hall to it's former glory.  A door each end that can be opened to create a through breeze for dancing and parties.