April 05, 2011
After sending Daniel out with a tape measure for the Smoketree, we have been measuring the trees and the garden so we can map out a garden design.   We had to measure the outside of the house and the measurements reminded me that I have a tax record from 1798 which proves that the house is infact the house labelled D. Deyo in the 1790 map with the road on the East side of the house.

The measurements of the house and the measurements of this record were exactly the same.  The house measure 51 feet North to South and 26 feet East to west.   Interestingly, we still have 6 of the original 7 large windows (the 7th original large, window was taken out when two additional windows were put in the living room).  The long thin windows are above the doors and one is still in place above our front door.  The other long thin window must have been above the other door when there were two doors on the East side of the house.   The two small windows being on the second floor to the north of the house - as John Stevens had imagined in his drawings. 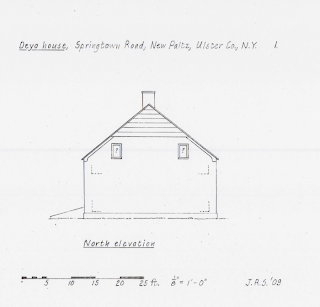