February 20, 2011
All the bids came in.  It took a while. We briefed most of the contractors around Thanksgiving... but this is Ulster County.   We have a lot of different types of work to do on the house this means a lot of different subs.  Electricians, plumbers, plasterers, mechanical engineers, painters, carpenters, mill workers...You name it, we got them all.

As the prices came in, we realized a couple of our dreams had to give. The open loop geothermal system, that took advantage of the high water table, was turning into quite a high ticket item.  The system itself was expensive but when you added the cost of drilling additional wells to supply enough water it really became prohibitive.   We will still be using air handlers on a conventional propane system, so at some point in the future we can review this and easily integrate it into the system.
Rebuilding all three chimneys was also costing a fortune.  We reduced this cost by only rebuilding the living room chimney which will also act as the flu for the new boiler and will create a corner fireplace with beautiful wood mantle (some day!).   The other two chimneys will still to be demolished as they are structurally unsound.  We will not be replacing the chimneys but we will be restoring both of the original Jambless hearths that are in the Kitchen and the dining room.
In the kitchen we will put an AGA stove on the old Jambless hearth.  This still needs a flu but it does not need to be masonry and can be created at a much lower cost.   In the dining room, we will restore the old hearth either by putting in some traditional Bluestone flagstones (as we uncovered in the kitchen) or use the old hand made bricks to recreate the hearth.  Rather than a fire place we are going to install the old cast iron stove that was in the house when we bought it. 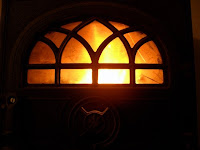 The advantage of this is that the wood will last that much longer than an open fire and we can use the top for keeping things warm in the dining room.   We will be rebuilding the hearth so it can hold the weight of a masonry fireplace and we will be leaving the space above for a full chimney in case we want to put a conventional fireplace in the dining room in the future.
The other significant cost reduction was to remove the kitchen island from the kitchen.  We will still find a big kitchen table for the room but the built in refrigerator drawers, the dish washer and the massive kitchen island will have had to be postponed.  Again, we are putting in all the electrical and plumbing so we can do this in the future but for now we will have to live with just a big table.    Daniel has already re-worked the kitchen design so that the Dishwasher goes into the cabinets at the side of the sink and the built in refrigerators will be half refrigerator and half freezer.   The wine will just have to live in the cellar...where it should be, quite frankly...with the cheese and the game.
Some other stuff will also have to wait.  We are spending a lot of money to find 100 year old heart pine planking to replace the floor where it has been damaged or removed.  Unfortunately, we may not be able to afford having all the floors re-finished.  This could mean very uneven and rough looking floors for a while.    The wood mantle for the living room, the wood panelling around the dining room stair and the bookshelves in the library are also going to have to be future projects.  They are designed and spec'd but will have to be installed at a later date.
All in all, not too bad.  We are not going to have to live without too much initially and we have some very clear future projects that can be completed as we can afford them.   We are hoping to kick this new reduced scope of work off this week.   Here's to being finished for the 4th July party.