February 06, 2011
Wow, what a winter.   Thanks to Mother Nature we were pre-warned.  In the fall we went on a number of river trips in the canoe.  On one of these trips, we were exploring one of the tributaries and we thought a squirrel was throwing acorns at us because all around there were projectiles hitting the water.   As we continued on our 'paddle', we realized that all of the oak trees were dropping their acorns, not one at a time but a huge deluge.  It sounded like it was raining little stones into the water around us.

Later, when we were driving along Springtown road we saw the same thing all along the road.  Millions and millions of acorns had fallen within 24 hours.  The road was covered with them (and also covered with the carcasses of dead squirrels that had been hit by cars as they feasted on this bounty...I kid you not).

It was so remarkable that we mentioned this to several people and discovered that this was a sure sign of a harsh and snowy winter.  And we were not the only ones to notice this.  It turns out this farmers tale is well documented folk lore.

For Christmas, Daniel and I were also given snow shoes by Daniel's parents which may also have tempted the Gods.  Either way,  whether it is the squirrels, the oak trees or Jack and Janet Flebut that we have to blame, I have to say I love the snow.  Especially when it comes up to your knees just walking to the front door. 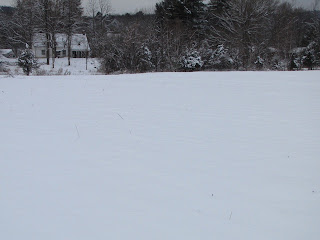 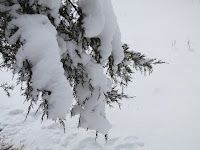 The second thing we did after the snow-shoeing was to clear some of the snow off the pond and create the best ice rink in the world.  There are not many swimming pools that automatically turn into an ice rink in the winter.  This is the pond/lake that just keeps giving.  When the house is completed it is going to have to work pretty hard to out-do the fun we've had on "the peninsula".

The weather continued to bring surprises.  As the sun went down it got so cold...minus 9ºF at night...followed by freezing rain.  When we returned to Dejoux the next day we were met with the most amazing sights.  Every single tree had a layer of ice over it.  As the morning sun hit the trees they glistened like jewels.  These photos do not do the spectacle justice. 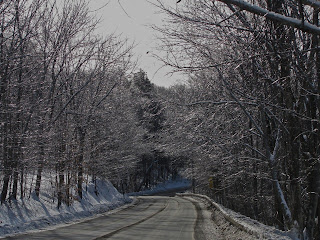 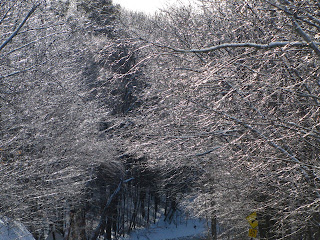 Back in Stone Ridge, the cats are not amused by all any of this.  There is at least a foot of ice piled up against the back door which makes coming and going very difficult.  We are using the front door these days. 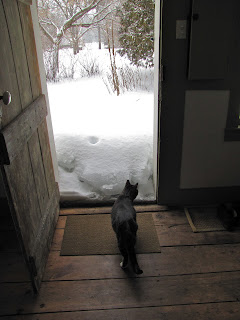 Construction update:
We are very close to starting the building work on DeJoux House.  We have all the numbers in which are eye - wateringly expensive.  A little "value engineering" and we should be good to go.  We have two contractors that we like,  have a good price and are able to start immediately.  Daniel is getting the building permit this week and then it will be all systems go.....