The end of summer (and the Maria Deyo festivities).

September 06, 2010
Wow, has it really been that long since I wrote a post on the blog. Sorry to all for my tardiness. But, honestly not much has happened in the last two months. We have spent the weekends floating in the pond. We love the peninsula and have had many lavish banquets there over the summer. Here are pictures of a few of them.

The grill by the lake has become a permanent fixture as have the "floaties". The floats allow you to spend a lot of time in the water without risk of touching the bottom or having to swim around and around in circles. Many hours of floating, coolness has been enjoyed.

The other feature of our summer have been the bonfires under the starry sky. Photos don't do it justice but we have had big bonfires and small fires and have loved staying by the lake until late into the night. Daniel's new iphone app (starwalk) that tells you the constellations using the GPS was the best $2 spent this year. Roasted marshmallows and Eaton Mess around the fire also featured heavily.

The great achievement of this labor day weekend was catching, cooking and eating our own fish from our own lake. Tommy Lee, Hailey, Spencer and Laurie White came to visit bringing their fishing rods. The fish were practically jumping onto the hooks. We caught 3 Bass on the first day and 6 Perch on the second. Every time we put a line in the pond we had a fish on it within 10 minutes. I cooked the largest White Bass in lemon juice on the grill and it was delicious, sweet, fresh and clean tasting. I hear Perch is good eating too so, watch out fishes.... 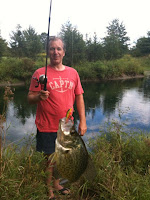