July 03, 2010
This week we received from John R. Stevens (author of Dutch Vernacular Architecture of North America) and the Hudson Valley Vernacular Architecture some wonderful drawings of our house based on what it would have looked like in 1765 (just after the kitchen was added). John's visit was reported here a few months ago and because we had taken all the furring from the walls he was able to see a lot of the original details and determine what the house would have looked like originally.

In 1765 the main road - the Kings Highway that went to Kingston - was on our side of the river and ran across the property between our house and the river. There was a river crossing in Bonticoe where the New Paltz residents could join this main highway.

The original back of the house had only one door and is now the front door. The original Dutch door from the center hall seems to have been relocated to its current location at some point. You can see where the hinges on the door were once on the opposite side of the door. John Stevens also marks on his drawings the 5 original windows that the house has. 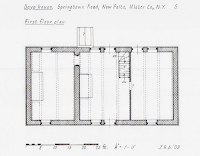 These drawings came at exactly the same time that Daniel finished some of the elevations and floor plans for the new lay out.

As you can see we are restoring some of the orignial structures and features. (albeit in a modern, rather than a museum like fashion). We will be restoring the kitchen addition back to a single room with an Aga where the original Jambless fireplace was. The center hall will go back to a full hall with the old jambless hearth restored but with a more modest, usable fireplace. One of the original doors, where there is currently a window, will be restored to a full plate glass door. We do not intend to use this as a door but as a big window with a view to the lake. A similar door will be placed in the old grain loft door on the first floor bedroom.

I am also loving what Daniel has done plain delft tiles in the guest and master bathrooms. The floor of the shower/bath wet area will be a dark, honed stone (like slate or blue stone with matt finish) with the tiles above. The guest bath and poweder room sinks will be built into plaster cupboards like this: 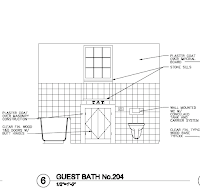