May 16, 2010
I decided it was time to give up on hearsay and word of mouth and clarify once and for all the provenance of DeJoux House. The goal here is to review the facts as we know them, based on real documents that we have seen or have copies of.

The only way to do this is to work backwards from the documents that we have. The contract of sale and the legal deeds of 374 Springtown Road list previous owners back to Jesse and Maria Elting who sold the house to Hiram W. Minard in 1872.

The 1875 map of Sprintown also shows the property as belonging to H. Minard. Right on the border of Rosendale, opposite the church and the school.


So, we know this was the Hiram Minard farm in 1872 and before that belonged to Jesse and Maria Elting. We have confirmed this sale in the Ulster County Clerks office, Book of Deeds #175 page 383. Which reports that Jesse Elting sold a farm farm of 120 acres to Hiram Minard for $9600.

This fits with the picture that we have a copy of from Jesse Elting Dubois. Dated around 1870. According to Hudson River Valley Heritage Jesse lived in a stone house on Springtown Road. The picture below is a picture of his daughter Lanette Dubois outside a stone house on Huguenot Street (not our house). 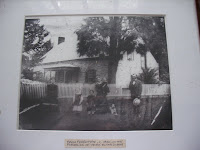 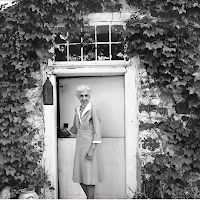 I cannot find any connection between Jesse Elting and the previous owner Abraham Relyea who is listed as the owner listed on maps of New Paltz in 1853 and 1858.

This is the only gap in the history as we know it. Abraham Relyea was the second husband of Rachel Deyo (nee Ean). After David Deyo Died, he left his property to his wife and two children Christopher Deyo and Abraham E Deyo. The documents we posted previously document Abraham Relyea buying back the whole 220 acre farm from the rest of his wife's family. (So what happened to the other 100 acres that belonged to Abraham Relyea but did not pass on to Jesse Elting or Hiram Minard?)
David Deyo is the D.Deyo listed in both the 1790 Map and is the son of Christoffel and Deborah Van Vleit who we believe were the first people to live in the house. (This portion of the Deyo family tree can be seen here)
So, if anyone can find our missing link. How and when did the house transfer from Abraham Relyea to Jesse and Maria Elting? What happened when Abraham Relyea died? Why did the property not stay in the Deyo family? Abraham Relyea died leaving a wife 'Maria'...was this Maria Elting? or was it just that everyone was called Maria in those days?