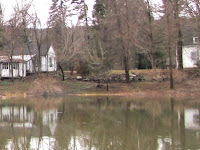 This weekend we heard a Wallkill flood warning that named the Springtown Road as one of the possible flooding areas. Flooding likely to be 13-17 feet. At Dejoux House the sump pump in the basement was working overtime but doing a good job of keeping the basement from flooding.

When we arrived the water was at 9 ft and the willow trees/ beaver dam were both under water. 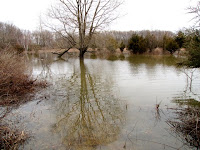 As the day progressed the water rose slowly but the house seemed pretty secure perched high above the flood waters. At the end of the day we only had about 13ft and the water only reached the spring at the back of the house, still some distance from the wall. The island in the lake was underwater and the field had turned into an island with water all around it but still unflooded. The woodland by the river was a lake. 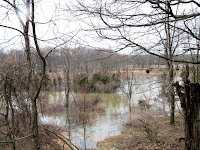 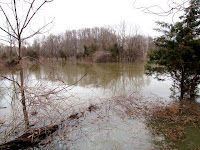