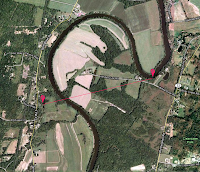 I am intrigued as to how and why two of the most prominent Maitre D' Hotels of New York City, Oscar Tschirky (Oscar of the Waldorf) and George Fiorentino (co-owner of the Colony Restaurant in NY and previous owner of DeJoux House) came to be living less than a mile away from each other in Springtown. If they wanted to (and as far as we know they may have done so on several occasions) they could both stand on their own property and talk to each other across the Wallkill river which acts as their the boundary line.
What was the draw to these two men? Was it pure coincidence? Did they know each other from Delmonico's? Were they friends or was it just the rich farm land and wonderful fresh produce of the area that attracted these later day foodies. 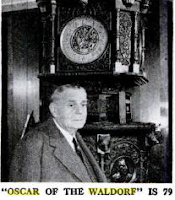 I am unable to find any formal connection between these two men, other than their proximity and profession. If we look back to what Springtown was like in the 30's and 40's it is clear that the river was a center of recreation for wealthy New Yorkers in the hot summers. Boating, swimming, fishing and hunting on the banks of the Wallkill are well documented. With the railway up to New Paltz, it was easy for New Yorkers to escape the heat of the city and there was a stop right in Springtown. Additionally, all along the west side of the river (our side) were guest houses and hotels for the summer vistors. A few hundred yards down Springtown road was the JC Schaffer hotel, again supporting the fact that this was a popular recreational destination. (I think the Schaffer Hotel property is for sale and has been on the market for some time). Unlike today where the car dominates our recreation, I imagine the river as a central thoroughfare of social activity. Boats pottering up and down the river, property owners and visitors filling the banks to swim or fish. The rural equivalent of Henley during the regatta or the popular waterways of Beaufort, NC. If this were indeed the context of 1930/40's Springtown it seems very likely that these two well known figures of New York's social scene would have known each other.
The other factor that could have made this a popular destination is the fact that the Mohonk Mountain House refused to serve alcohol, being Quaker and dry. So while Mohonk played host to many international dignitaries and celebrities, there is a good chance that other wealthy New Yorkers liked a tipple or two. The Colony (which George Fiorentino was part owner) was a famed speak easy that kept alcohol hidden in an elevator that moved floors as the police inspected the building. Chances are DeJoux House and Springtown showed similar disrespect for the rules of prohibition.