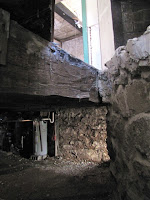 Sorry for the lack of posts. We have not been up to the house for three weeks. I spent a week over in Long Beach, CA at the TED conference. I met a couple of people there who were interested in stone houses. I got a lot of good advice about potential power sources from ClearEdge Power and some great advice from Catherine Mohn on how geeks build green.

The asbestos is gone, as are practically all the walls. We removed the modern hearth that looked like 'crazy paving'. We want to make a simpler, more traditional hearth. This hearth was tragically cut into the wide plank floors in the living room which will require some patching. From the basement you can now look up into the living room (pic above).


We have had the structural engineer round to tell us where to put the structural supports in the basement. At the moment there are only temporary "lolly columns" holding the beams up. 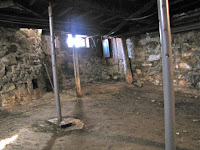 The plan for the basement is as follows:
In addition to the expected news for the basement, we had some unexpected news regarding the chimneys. Chris Hoppe, the structural engineer, suggested we replace all three chimneys. The newer one in the living room only has a 7 inch flue so needs to be larger if we want to use it as a fireplace (not a wood burning stove) - which we do. The one in the middle, over the jamb-less fireplace in the dining room, is not the original and has fallen from the wall and has a hole in the base of it where the boiler flue was inserted from the basement. 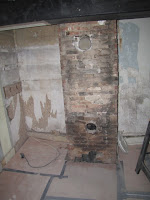 The chimney in the kitchen, that sits on the old jamb-less hearth, should also be removed as it is also unstable. This means we have the opportunity to put the AGA cooker in this space and use the chimney for ventilation and exhaust.

In the basement (behind the foundation for the living room fireplace) the major support beam (that runs along the south wall) has clear evidence of charring. We wonder if this was in fact the remnant of a corner fireplace hearth. 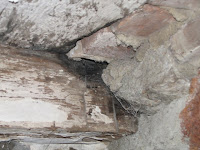 The rest of the day we spent measuring and re-imagining the master bed/bathroom. The beauty of the 'knee-wall' the full length of the house has caused us to consider keeping this exposed. I think it would be wonderful to remove the studs (pic below) and simply re-plaster this wall, keeping the sense of the original structures and construction method. Daniel meditated on the how we do this without looking like a ye-olde wo'ldy English pub. 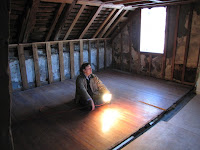