DeJoux House is not your average pre-Revolutionary War stone house. Usually they are dark and have low ceilings. We are lucky the bottom of the beams are 6ft 8in from the floors and the ceilings are about 8 ft. Our new kitchen (two rooms knocked together - left) has 5 windows in it and there are a total of 12 windows on the ground floor.

Obviously some of these windows were added over time. The question became which ones were the originals? In one of the early tax lists (1798, I think) I saw that the house was listed as having 7 windows.

The 1870 Jesse Elting photo helps a little here as it shows one window (upstairs) and 4 windows at the front of the house. By studying the frames and the surrounds of these windows versus the others, I have been able to identify some of the features of what I believe are the older windows.

1) All of the older windows are 12 panes over 8 and have thicker muntins between the panes of glass.

2) On the outside, the older windows have wide header at the top with clearly visible pegs where they connect to the side posts/jam. 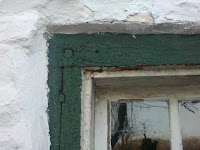 3) On the inside, trim around the windows is flush with the wall and have a 'quarter round' moulding. Where the dropped ceilings have been removed this moulding continues along the top of these older windows. 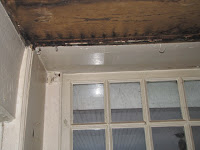