November 01, 2009
Last weekend was lightweight in comparison to what we did this weekend.
We started out simply tidying up. Although the house was 'broom clean' there was still a lot of dirt/cobwebs, dust, etc so we started cleaning in the room with the beehive oven.

The fun started when we opened the old cast iron stove and found the remains of three squirrels and two birds that had obviously been there for some time. (Note to self, need to put a metal guard over the top of the chimney). It was like some weird recipe/concoction/spell which was very appropriate for the day which was Halloween. After cleaning out the stove I move 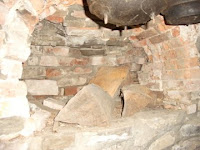 d on to cleaning out the beehive oven which had a lot of old bricks that had fallen out. I kept the ones that I could that looked old and vacuumed up all the dirt and dust. It looked much better. Then Daniel and I brushed all the flaking paint and wall paper off onto the floor and swept. Just this effort made it look much better.

(Then in a break in the rain I went down to the pond to treat the willow trees with Beaver repellent. Which I know probably won't do a thing but it was the best first step I could think of).
While down at the pond I heard some loud banging from the house...When I got back I saw that Daniel had opened up the fireplace in the living room to see what we had behind it. Don't worry, the fireplace was clearly a new addition as it was concrete and ugly. The wall above the mantle was modern sheet-rock so Daniel felt fine bashing into it. Down in the basement below this fireplace is a huge stone hearth 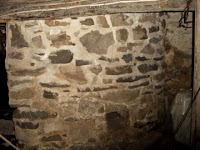 that is built up to this location in the living room. Because of this we felt there must have been something different here in the original house. But one mystery, revealed another.

Behind the wall was a very roughly built (obviously not original) red brick fire box that snaked up, rather inelegantly, to the flue above. Behind it, on the wall, was some old 'peacock' wallpaper that had a clear outline of a mantle against the wall on one side (but oddly not on the other side). So, we seem to have evidence of three different fireplaces in this one location. The original, corner jamless (we guess) as evidenced by the basement hearth, the wall mantle outline indicating an 'English Style' jammed fireplace at some point and the newer firebox and concrete stucco. 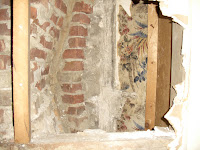 The same is true of the third hearth in the dining room. Daniel and I pulled out the 1940's cupboards and found a new (19th Century) flue is in a very poor shape. However, the old jamless chimney above (on first floor) is as solid as a rock. It looks like we might have to take that fireplace back to the original jamless state and think about how we re-create a fire place there too.

We are well and truly in our discovery phase right now. Ventured up into the attic this weekend to find the most wonderful old beams which are held together with pegs. You can see the hand hewn axe marks on all of them and despite being 269 years old they look as solid as anything.

Think it is time to get the Hudson Valley Vernacular Society in to tell us what we have.