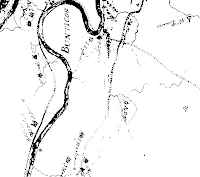 The previous owner gave us a map from 1790 that showed the house. In 1790 the house was identified as being owned by D. Deyo.
This makes a lot of sense as Christoffel and Deborah's first child was called David and he was baptised on 19th of February 1758 in New Paltz Church.

In the review of taxes and inhabitants of New Paltz in 1765 the house is also identified as having three adults living at the property. Since Davids brother Jerzok was only one year old he was likely not counted (being born in 1764) and his sister Lydia was not born until 1766 (again based on baptism records in New Paltz church).

When you look at this map in comparison to the map on Bing maps it is amazing how little the river has changed course. You can still see the two little tributaries that flow to the Wall Kill river. With the Magic of Photoshop you can see how accurate this map was and how the the house marked D.Deyo is clearly our new property. It also shows how the old road originally ran closer to the river and was therefore between the house and the river. We will have to look out for this when we go hacking our way around the property. 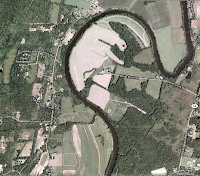 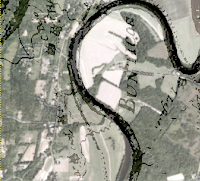