We have signed the purchase contract 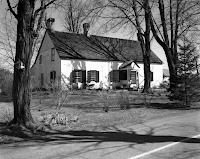 Here's what we know so far:

The house was built in 1740 by Christoffel DeJoux (also spelt Deyo, Deijo, D'Iou, D'Oyaux, Deyoe). We opted to use an earlier spelling of the name as there is already a Deyo House on Huguenot Street in New Paltz. After the original house was built a kitchen/addition was added in 1765...other than electric and plumbing, very little seems to have been changed in the house. The house still has original dutch doors, 22 inch floor boards and original fireplaces and beehive oven. Located in Springtown, on the banks of the Wallkill, the house has 350ft of river frontage and has a huge pond with it's own island. There are many other stone houses in the Springtown area. Including this one 3 doors up.

The house was first inhabited by Christoffel and his wive Deborah (nee Van Vliet) and their children. Christoffel was the grandson of the original patentee Christian Deyo and son of Hendricus Deyo and Margaret Van Brommel.

The house is listed in the 1765 valuation of property in New Paltz and at that time was valued at fifteen pounds.

In the 1790 Federal Census the property is listed as having two males (presumably Christoffel and his first son David), one female (Deborah?) and 4 African Slaves. After the death of Christoffel in 1792 the house was passed on to son David. According to the 1798 tax map of New Paltz, David Deyo was taxed for three female and two male slaves. The house was valued at $425.

The picture shown was taken in the 194o's by Erma Dewitt.